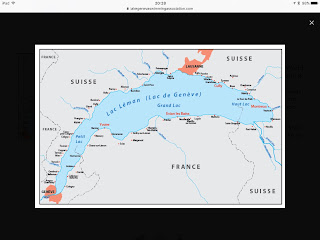 So the LGSA (Lake Geneva Swimming Association (https://www.lakegenevaswimmingassociation.com/) has opened up the old 'Classic 12km' swim route which offers swimmers the chance of swimming from Lausanne in Switzerland to Evian in France. A(nother) border buster swim! Liked the sound of that hence applied for the inaugural swim last Saturday 26th August 2017.

Having completed the full length of Lac Leman/Lake Geneva in ca. 33 hours in July 2016 I really fancied the idea of coming back with the family without the pressure of a 43 miler during a 10 day vacation. We stayed in Nernier in France which I think is the most stunning village on the lake but that is another story altogether for another time.

This really should be on everyone's bucket list and is suitable for seasoned veteran or mad-keen newbie. I really couldn't envisage a more idyllic setting & event for someone attempting to increase mileage for the first time over 10km. Wish this had been on the international 'open to all' circuit when I started. Not to be taken lightly but ideal for someone properly stepping it up... 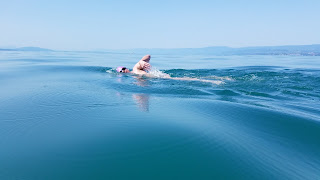 (Easing oneself into proceedings...only small bit of swell to disturb one's stroke)


Stunning crystal clear blue ca. 21c water, air temperatures in the high 80s and hardly a breath of wind. This has to be as close to open water swim heaven as one can get. Usually when I swim in warmish water in the UK I get bitten by duck fleas - NOT so here!

I really love the idea of a cross border swim (ensuring to take one's passport in the feed bag!) and  the LGSA laid on the kayaker (I had 'Chris' from North Devon who was absolutely first class). I have seen the title 'border-buster' used in another swim in the US and this is applicable here. 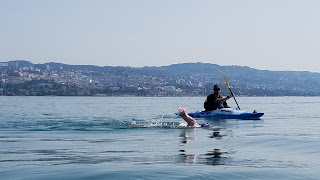 
What was the swim like? Got in and the water felt warm, pure and absolutely divine. Silky smooth like nowhere else on the planet. There was almost no chop in the lake but the odd bit of swell (probably from the odd ferry that is the life blood of this lake). If you stopped to feed (I did 4 times) it was one of the quietest moments of your entire life surrounded by massive mountains. If you are trying to achieve zen in swimming then I think they've cracked it here as most of the ca. 5 hour swim I was in that zone.

3 safety boats with lifeguards, every swimmer had their own kayaker (laid on for them!) and felt safe 100% of the time. Briefings for kayakers and crew were incredibly detailed. There was only one retirement on the day (a wetsuit swimmer who got cramp but after a short rest did get in to finish!) 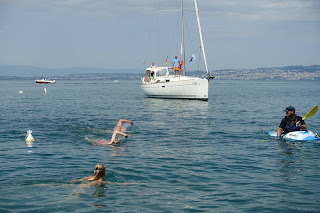 (My girls swam out for last 200m so we could have the 'champagne finish' together. Observe Sophia taking after the old man's front crawl recovery!)


Tim Davies, Charlie Masding and Ben Barham from the LGSA have put on a great event here and I reckon it'll sell out quickly next year so you can check it as a weekend away or dovetail it in nicely with a family holiday like we did. It's probably more like a 13.5-14km by the time you have finished (and by judging by many of the finishing times) but that's just to warn you to put in enough training. My advice is to look to the side at the stunning mountains & scenery as you'll be finished before you know it and the best views are from that lake.

What an amazing and unique experience. Thank you all involved in the LGSA. All picture credits down to Jaimie Monahan and boyfriend Arik.

Posted by Mark Sheridan at 00:59 No comments: