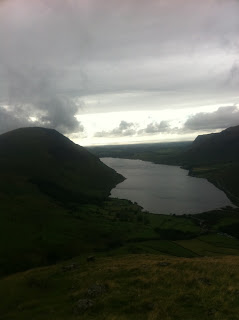 This has to be my favourite place on the planet. It's moody, unpredictable and the temperature changes of the surrounding area and the water in the lake can move very rapidly. On 24th August 2011, I asked Mrs Sheridan (Wife) and the 2 girls to drop me off at the Wasdale Head end and meet me at the Youth Hostel end. I stuffed 2 gels down my trunks and swam down the screes to the other end. It felt almost prehistoric and for the first mile thought that the monster from the murky blackish brown depths was going to take me out.

What was I doing there? Well, I was down to swim Windermere on the 3rd September 2011 and after many hours of training with the channel hopefuls in Dover Harbour all summer wanted a final bit of freshwater and cold water training (less buoyant!). I figured that if I could handle Wastwater solo then Windermere would feel at least warmer and do-able. It might feel unsafe to some but after a Swimtrek weekend in the Lake District, I was full of confidence and decent acclimatisation after swimming Grasmere, Rydal Water, Easedale Tarn in 'skins'.... 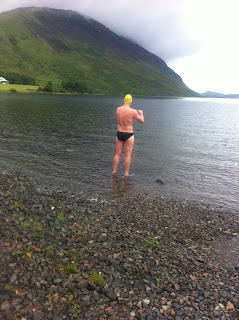 This was a magical swim and after taking the temperature (as always before a swim) with my digital thermometer, I turned to Mrs Sheridan handed her the temperature gauge and asked her to note 13.7 degrees Celsius at the edge where I entered near the farm and 'beach' at Wasdale Head. I then rinsed the goggles and got the show on the road. The water felt so cold at one stage in that little bay that I thought someone had handed me someone else's arms and legs. After one mile I waved to the family as my signal that I was OK so that they could make preparations to get in to the car to go to the other end. I then necked one of the maxim orange gels that I had stuffed in the trunks and felt immediately about 5 degrees warmer and happier. Back almost in comfort zone. Instead of then thinking about the length of the cold swim I focused on the edge and getting to the next massive bolder under water that had been repelled by the cliff face above.

During this phase we went past the mighty 'Screes'.......


There were loads of these huge rocks with some of them bigger than cars immersed in this clear water with no plant life growing around them. This was just me & the lake and each time I thought about this I just thought about dinosaurs roaming this place and how prehistoric it all felt. I just couldn't remove this thought from my head for what seemed like ages. After 2 miles I knew that I was going to make it after necking my final gel and the water was now less choppy as I had swum through a bit of a storm. I could make out the end and the little calm & sheltered bay that was going to be the landing point. This was paradise to me. I was now in the long distance swimmers state of Nirvana (probably something similar to runner's high) I savoured every last minute here and the bay felt warmer (it was in fact barely so at 14 degrees). I could make out the figures of the family and everything seemed quiet, serene and peaceful. Mission accomplished, a huge confidence booster ahead of Windermere and an achievement a few years ago that would have seemed almost impossible. This is not the longest swim in the world but it means a whole lot to me and always will. I then necked a maxim protein shake to recover and we decided to spend the afternoon taking on Scafell! 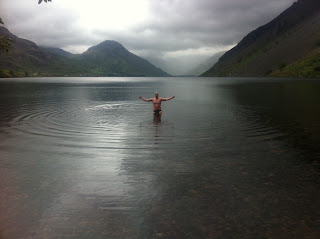 The end of Wastwater (note lovely clear water, screes on the right and storm that passed in the background).
Posted by Mark Sheridan at 12:43