Got back from Bala and one thing keeps striking me. It doesn’t matter how long these BLDSA swims are but the feeling of achievement doesn’t diminish as they are all tricky in their own right……….

Was feeling slightly nervous ahead of the Bala ‘training’ weekend. My longest mileage weekend in fresh water with the absence of buoyancy from salt water (had a 6 hour Gozo and 9-mile champion of champions under belt but both in salt water).
Went across the border into Wales on the Friday afternoon and it started to lash it down. Nice return to Wales I thought. Had a coffee in the hotel with my canoeist for the weekend – an English guy who lives locally called Darren who runs trips to Nepal via his company (http://www.purelandexpeditions.com).  A very useful extreme canoeist whose skills would not really be severely tested during the weekend – but it saved me havingthe hassle of dragging a mate up from Kent to accompany me….(will be a great contact going forward). His parting shot after imparting advice on the local chippie was to warn me not to step into pubs at the eastern end of town as they often housed more of therascal element of the local population (I was to hear from them later).
I then drove round the lake and went for a magical pre-supper swim at Langower where there is a stone jetty & where the Bala railway pulls into a small station (This, funnily enough was to be the start of the race on Sunday). All very quaint. A few ofthe locals stopping to watch a lunatic go for an evening swim – the fisherman at the end of the stone jetty admitted to ‘swimming a width of the lake once but watch out as it is cold’. After an early night, was awoken at 1am on Saturday by the local ‘yoof’having a right old go at each other in the car park out of the back of the hotel shouting aggravation at each other in Welsh. A charming interlude to the night’s sleep from some lunatics with way too much time on their hands and sweet f.a. to do. 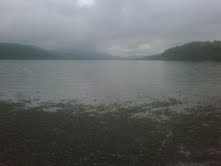 After watching the 3k loop race finish we led into the water which seemed reasonably pleasant at what the officials said was 14 degrees. In fact, it felt warmer to me as it had done the night before. The mission was to swim 3 miles to the other end ofthe lake, turn round the boat at the end and then swim the 3 miles back.

Beginning of 6-miler (i'm the gimp in the red hat refusing to tow the line and wear green...): 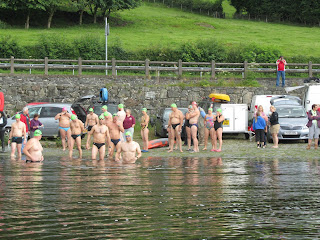 I was warned by Janet Wilson (the organiser for Loch Lomond) in no uncertain terms that if I quit during this 6-miler then my entry form for Lomond would duly be used for confetti..that fairly galvanised the mind!
Set off quickly to try and set the tone for the race. The first 2-ish miles went without incident and after pulling in line with the sailing club was beginning to wonder how much furtherwe had to go but the turning boat was nowhere in sight so the final mile before the turn seemed like a slog (we all felt the same way!). The boat turned, banana dispatched and decided to kick harder to lose a few of the punters who were on my tail.  There mustbe more of a current at this top end helping as I felt like I was shifting much faster compared with the slog in the previous mile to the turn and with it my mental state was more euphoric. Continued to make decent headway until the last mile when could seethe end of the lake that felt like it was never ever coming closer. It must have done as got there in ca. 3.5 hours which was in the parish of 40 mins off my personal best. What a difference a year and 5 more swim lessons has made.  I concurred with Liane,the BLDSA President, that this is not an easy swim and the last mile is really tough. My kayaker (who had a race radio) reckoned that a quarter of the field retired (in fact I think it was 3 out of the 25). We all stood on the side to clap in Chris Evans who finished ca. 10 mins before the cut off time and his longest swim in his swim career – a remarkable personal achievement. He looked pale and cold and that swim to the end must have taken a fair amount of determination. He was still shaking when he picked up his certificate.Very gutsy performance.

Awoke on the Sunday to a rare sight for me in Wales – blue skies!! Decided to make the most and go for a drive 5 miles up to the north into the middle of nowhere before the 3-mile swim for the day. Young buzzards were making sounds and could see all the mountain ranges (Cader Idris etc) & swallows flying acrobatically. I thanked whoever was looking down on us for such beautiful weather that I don’t think I’d ever seen in Wales before. All that was to change by the time the swim came around a few hours later!!The cloud  came in, and with it, a wind. The only benefit, however, was the wind helping to push us down to the finish. Yorkie (the only breaststroker) and I were desperate to get into the water as it seemed warmer than the cool that the wind was creating.We set off on a course across the lake and then down to the finish from the day before. There were catamarans on the lake going so fast they seemed like fighter jets compared with us swimmers. I think some of us were just waiting for the aggravation that was going to happen at the turn buoy with those boats screaming around. (We were told about the previous year’s near miss!)

Took it steadier than the day before and struggled to find rhythm as the shoulders were mighty stiff. Made steady progress and looked to the shore and kept it in mind to just take it tree-by-tree, bury head into water to breathe and not get ahead of myself. It was way choppier than the day before and this now reminded me of my time between mile 2 and 5 on Windermere where the waves were picking up my feet and drilling my head into the water which was making it hard to get any breath (let alone rhythm). I said jokingly to my Kayaker that I thought I was going to drown – the one saving grace was being able to drink oodles of Lake water as I went along which is a refreshing change from the ghastly water in Dover harbour.…. Daz, my canoeist, saved me some time again on the swim by going headland to headland where some of the punters seemed to go down the middle (despite race organiser’s (Andy Wright) multiple recommendations). We touched the timing mat after ca. 1.5 hours. Chuffed to bits and 15 mins off my PB! This was wind assisted so won’t qualify on Olympic rules….
Really didn’t feel cold once and managed to swan around in shorts without shaking afterwards wacking back latte’s from the slowest café known to man.... 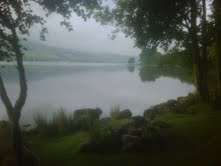 The buzz of achievement stayed with me all the way (5.5 hours) back to sunny Sevenoaks. Another part of the world discovered that is really truly beautiful – as long as it isn’t heaving it down – and water that is much warmer than one would have thought for Snowdonia. There were some really majestic and tranquil moments during the weekend as whitnessed before really early on the Saturday  morning...... Within 2 weeks, Ullswater, and arguably England’s most beautiful swim on the cards.
Posted by Mark Sheridan at 14:08

Mark Sheridan
Hi - My name is Mark Sheridan. I live near Sevenoaks in Kent (UK) and in my spare time I am an open water ultra-distance swimmer. I have completed many swims over 21 miles including 43 mile Lac Leman (4th solo ever & 1st Brit), the English Channel (3x), Loch Lomond (44th person), the Catalina Channel in California, Two-way Windermere, Lake Tahoe and SCAR to name a few...I served on the committee of the British Long Distance Swimming Association for 7 years (President 2017). I was awarded British Long Distance Swimming Association's Swimmer of the Year in 2013 and also won the Global Marathon Swimming Federation's Barra Award for Best Year in 2015. Above all, I enjoy sharing my experiences to help others reach their goals and giving back to this wonderful sport on a voluntary basis. I currently hold the British record for Lake Tahoe solo which I set in August 2018 taking almost 90mins off the prior benchmark. In June 2019, I completed 20 Bridges to bag the title of 'Triple Crown'. In 2021 I completed a 51km solo swim round Jersey in 10 Hours 21 mins raising over £8600 for Macmillan Cancer support