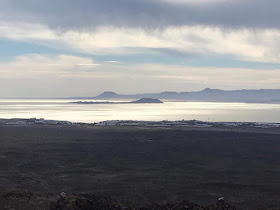 I have been fortunate enough to have swum all over the world but I think this relatively short ca. 16km swim has served to remind me the entire reason why I took up this fine sport and genuinely define what I want to get out of it...'To plan and complete the pioneering swims of the path less well travelled'. This was a similar vein in why I took on 70km Lake Geneva solo in 2016 (and indeed Loch Lomond in 2012) but this one actually was remarkably easy to plan/execute and involved some fun strategising with a local pilot, Mauro Poggi, who takes a real pride in his piloting. I only knew of 2 soloists in skins prior to our swim in December 2017 but again the beauty of this swim is that it can be done all year round! We completed it on the 27th Dec 2017 so if you are wondering what to aim towards to keep the training fun in the Winter, why not aim at this one which is only a cheap 3.5 hour flight from the UK?

I had been holidaying over the Xmas period for a while in Lanza (the girls can surf and I can swim!) and in the last few years had witnessed posts from Vicky Middlemast (nee Miller) and Ned Denison succeeding so wanted desperately to get a window to execute this before getting any older.

To cut a long story short, organising one of the finest pilots I’ve ever met was just luck. A friend of a friend of Vicky’s pilot was around during the dates, not only had the fastest 34 foot rib Lanzarote had to offer, was willing and keen to meet me beforehand to plot the route, answer questions etc so that all I needed to do was swim. Mauro Poggi was outstanding and a craftsman of his art with a perfect boat for the job - very stable in a wave, easy to get into and out of plus 640bhp thus only a 10 minute ride back to base. It has two engines, great at idle speed and holds the route perfectly with autopilot. We essentially plotted a route which would be longer than the birds-eye route but would avoid 2 very busy ferry routes. 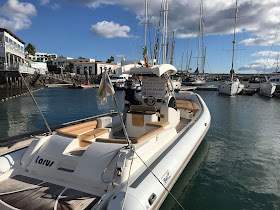 I managed to rope in Lucinda and Mark Bayliss who also came along for the swim and are always up for one mad harebrained scheme or two! (Most of the photos on this blog are theirs btw - thank you).

We decided to start our swim at a particularly secluded beach 1/2 km west of the famous Papagayo horseshoe shaped bay which Lanza is famous for. Our starting beach was ONLY accessible by boat (in centre of pic below). The coldest part of the swim was stripping off at 9am but once we jumped into the water to swim to the beach, it felt so much warmer in the water than on the boat. The beach was magical and encircled by an amphitheatre of steep rocks. Quite a contrast from a Channel Swim beginnings I remarked! We soon cracked on with the task at hand, cleared the beach and slowly got into a rhythm making steady progress as we could still see the bottom and after 20 mins cleared the southern most point of Lanzarote. 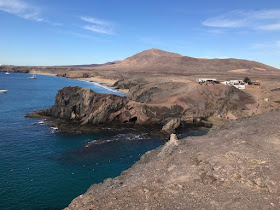 
We were headed for the eastern flank of the island of Lobos which marks the 2/3 point of the swim and breaks up the vista with a lovely lighthouse and volcanic rock. Our sighting point was actually the large mountain on the left of the picture below which is a volcano on FV. The water was stunningly clear turquoise with terrific visibility but save for the odd fish, very little came into view in terms of marine life the whole trip. Not a single jellyfish!
After 4.5km, we were in the middle of the channel,  Mark’s calves cramped up and his swim was over having to spend the next 10km helping with feeds and chatting to the pilot - his payback from doing too much running (something I will not suffer from)! Lucinda and I upped the pace and we thumped out a good 3.4km hour. We were absolutely flying along with a pleasant 10mph northerly breeze helping to blow us towards FV! After the 3rd feed on the hour, the lighthouse at the northernmost point of Lobos was right upon us and it was stunning having the island as a distraction. The feeling of liberation being out in the middle of the ocean for me was pretty magical. For someone who limps around on land, this felt like proper nectar. I loved every single minute of it tbh. All the winter training (including a 100x100m session only 11 days prior) really paid off as we flew alongside Lobos island. 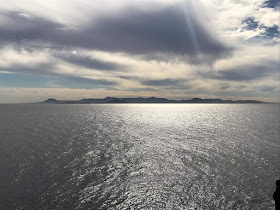 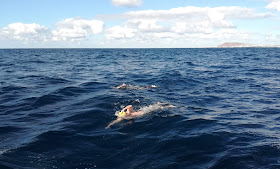 At the end of the island, we had a good 2km stretch to the sandy beach at FV famous for its kitesurfers and we made towards the right side of a big hotel. It was going to be a tough last hour as now a decent westerly wind was cracking in and the sea felt REALLY big. These were some of the biggest swells I have ever encountered in my life but just felt so much fun. I was never far from the support boat and couldn't wipe the smile off my face. Contrastingly,  Lucinda was now beginning to feel sick in the swell but we had come so far, throwing in the towel was never going to be an option. 'Look how far you have come' I urged! She really showed considerable bravery after being sick to crack on to be within sniffing distance of landing the swim.

We battled through a confused sea into the last kilometre and after seeing the sea bed again, felt reassured we were making enough progress to conclude this swim was ours for the taking. One arm after the other we finally got into a position where the breaking waves meant we could navigate our exit which was easier said than done. I raised by goggles on top of my swim hat to try and work out a clear path to take to walk out of the water but a wave came and ripped them clean off my head never to be seen again. I put my right foot in a hole in the sand (there were many voids from a big rocks) which could have been a real ankle breaker if you didn’t have your wits about you. Eventually, inch by inch we were freed from the breaking waves congratulating each other and in search of shells for the kids as souvenirs! I found 2 massive rocks and shoved them down the back of my trunks without realising how much they were doing to drag me down in the goggle-less swim back to the boat! 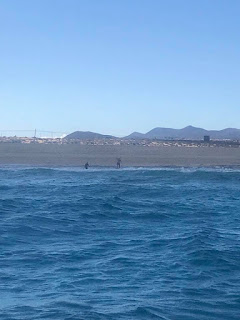 It was easy to use the stern ladder to haul oneself back onto the boat and the boat ride back was 10 mins of thrill-speakers exhilaration as Mauro unleashed the potential of 640bhp across 2 engines. It was something to behold being on a boat which only takes 2 hours from Lanza to Africa! Back on the dock, Mauro pulled out some lovely local beers (8% strength!) out of the boat's bountifully-stocked fridge and we toasted with smiles all round. He even stopped at the local Queseria on the way back to wash some local goats cheese down with the beer - sure that helped with the recovery!

I never felt cold once and could estimate the temperature of the water around 18c-20c the whole way. Even Simon Griffiths could do this in skins I think! We reckon the swim was around16km all-in which is an ideal marker for someone new to the sport or upping their distance. I actually couldn’t think of better training for Catalina than this. Would I do it again? Certainly. Everyday of the week. I am even plotting returning for a few other swims I want to do in these waters. Mauro was awesome from start to finish and charged us 100 euros per hour whilst on the boat but threw in pick up and drop off from the hotel too. Between us execution was Eur 700 which I think is a bargain for such a trip. Everything was just perfect, all we had to do was swim.  This is no 'gimme' of a swim and the last 2km is tough (but isn't it always!?) but if it were too easy, it wouldn't be worth doing!

Get in touch if you want more details of the swim. You can find Mauro's page here: https://www.nauticplus.com 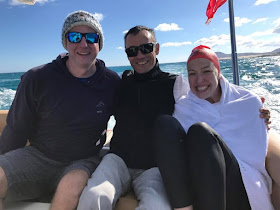